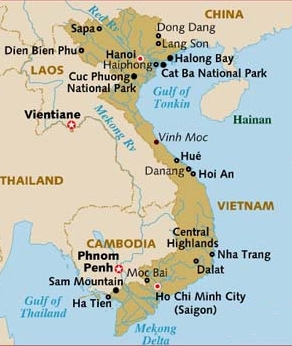 On the other side of the world the Southeast Asia country of Vietnam holds a unique place in American history. Most Americans, including myself, know very little about this country except for the Vietnam War. That changed after I spent three weeks traversing this now peaceful and scenic country in the winter of 2002.

I started my journey across Vietnam visiting friends living in Saigon (officially known as Ho Chi Minh City which no one bothers to call it). I spent several days sightseeing in fast-paced and muggy Saigon and boating through the endless canals of the Mekong Delta. I then headed north to the charming and relaxing riverside town of Hoi An (also a World Heritage site) which is located on the central coast of Vietnam. On the way to Hoi An I passed through Da Nang, where in March, 1965 the first American combat soldiers landed. This event signaled the start of the long and controversial Vietnam War. 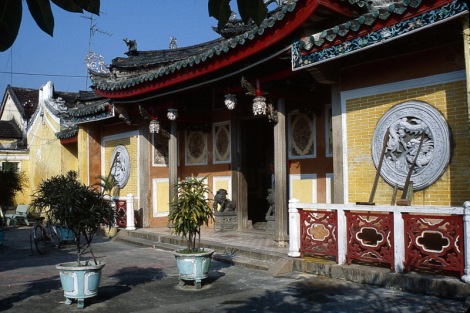 I grew up during the height of the Vietnam War. Spending the last ten days traveling across the southern part of the country and passing through Da Nang brought back sharp memories and emotions from my childhood. I easily recalled Walter Cronkite on the CBS Evening News reporting the weekly body count of all the soldiers who had perished in a far away place.

Hoi An was a welcome relief after spending time in crowded and bustling Saigon. Famous for its architecture, clothing retailers, unique cuisine and low key atmosphere, Hoi An was the perfect place to unwind. 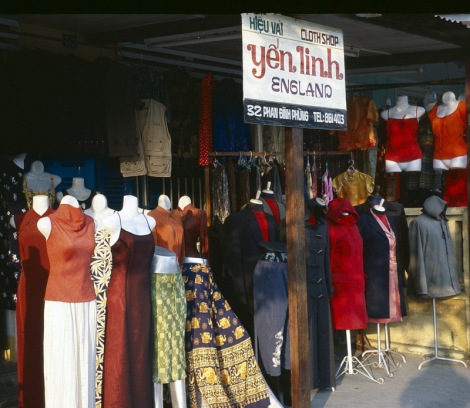 Most people see the world as a passive passenger in an automobile or bus, watching from inside while the world rushes by. However, when you travel by foot or bicycle, you often find yourself living in the moment. And that’s where I found myself one late sunny afternoon in Hoi An.

On that afternoon I rented a well-used single-speed bicycle. My destination was Cua Dai beach, five kilometers distant on the South China Sea. After a pleasant ride passing small farm houses and verdant rice patties I found a mostly deserted beach with the finest sand anywhere. I spent a couple hours enjoying the solitude and the sound of the crashing waves. 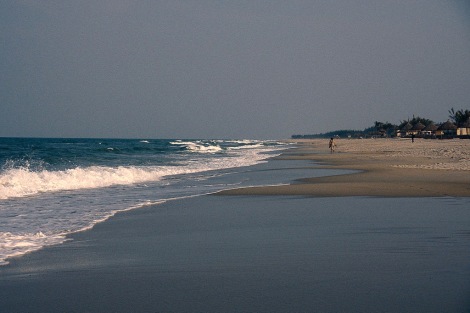 On my ride back to Hoi An I passed a courtyard where three men were playing volleyball. One thing I kept noticing while traveling earlier in Cambodia and now in Vietnam was the number of people playing volleyball on outdoor concrete or asphalt courts. Being an avid volleyball player myself, I was both surprised and curious about what I saw.

I felt compelled to pull over to check out the game and immediately applied the bicycle’s brake. I watched these men for a few minutes thinking it would be fun to play with them. Just as I decided to enter the courtyard, one of the men motioned to me to come join them. Because there were only three players on the court, I joined the solo player on the near side of the net. With similar skill levels the two of us played well together which made the game very fun. It was just like playing at home in Colorado – except for the language difference, the concrete surface and the warm and humid weather.

My teammate and I were both skilled at the bump, set and spike strategy in playing volleyball. I appreciated my new friend’s skill and court sense. And I got the feeling he felt the same about me. When either one of us shanked a pass or hit the ball into the net we would each call out “Sorry.” That was about all the English we exchanged. We played hard and even though this was the dry season we easily sweated thanks to the climate. 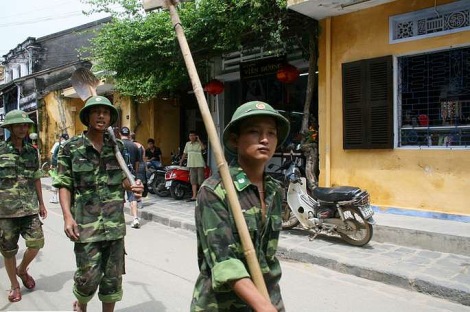 Adjacent to the volleyball court was a white, dilapidated Colonial-style building where a number of men watched us play as they relaxed on the building’s broad porch. The only color on the building was a large gold star on a broad red background mounted above the entrance. Above the gold star on the roof was what appeared to be a large-caliber machine gun covered in tan canvas. Suddenly, I realized I was inside a small army post and that my fellow volleyball players were Vietnamese soldiers.

Considering our history with Vietnam, the irony of the situation was overwhelming. I stopped for a moment and thought about the absurdity of what was happening here on the court. I smiled, shook my head in disbelief and took another pass from my teammate. Around 6 p.m., my new friends pointed to their watches and the building, gesturing that they needed to leave. Apparently, they had duties to attend to. However, instead of telling me to leave, they instead motioned for me to follow them. We passed to the side of their headquarters and headed toward the plain and run-down barracks around back. Inside a number of soldiers were lounging about relaxing and talking. It looked like this place hadn’t seen a fresh coat of paint since the war ended in 1975.

While the two soldiers I had played against showered and changed back into their uniforms, my teammate (a physician I learned), offered me tea and some local fruit. Even though it’s customary to offer refreshments to a guest it was still a nice gesture. We chatted for a while (as much as we could given the language difference), exchanged addresses, and then said our goodbyes. Vietnam is known for it friendliness and these soldiers certainly were very welcoming. 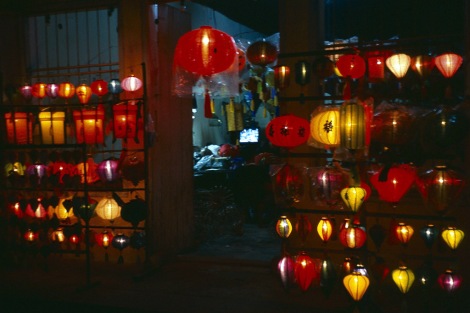 The sun had set and it was time for me to go. Pedaling my one-speed in the twilight back to Hoi An it struck me hard what an unusual encounter I just had. I wondered what my new friends thought about me and our brief time together. Although we had been sworn enemies just decades ago, it occurred to me that my American status hadn’t mattered at all to these Vietnamese soldiers. Thinking silently to myself, I realized the significance of my day – I had just made new friends with past enemies.

“Twenty years from now you will be more disappointed by the things you didn’t do than by the ones you did do. So throw off the bowlines, sail away from the safe harbor. Catch the trade winds in your sails. Explore. Dream. Discover.” – Mark Twain